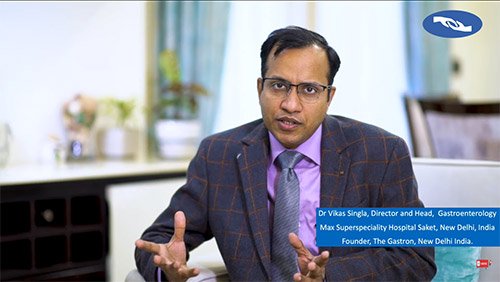 Difficulty in Swallowing Food: It may be Achalasia Cardia

Swallowed food and water move through the food pipe (Esophagus) in the stomach. Food and liquids are stored in the stomach, where digestion starts after mixing with the acid. To prevent the backward movement of food and acid, there is a valve between the food pipe and stomach, this valve is also known as the lower esophageal sphincter or LES. Once we swallow food or liquids, the smooth opening of the valve allows the food and liquid to enter the stomach. In a few patients, the valve does not open, which leads to difficulty in swallowing and drinking. This condition, of non-relaxation of LES, is medically known as Achalasia cardia.

The exact cause of achalasia cardia is normally not known. Previous viral infections may be the cause but are not well proven.

What are the symptoms of Achalasia Cardia?

The most common symptom is difficulty in swallowing food and liquids. The patient feels that food is stuck in the chest. Most patients, modify their diet to relieve the symptoms. Few patients take more liquid and semisolid in their diet and spend more time for consumption of each meal. This also leads to a reduced intake of calories, and few patients start losing weight.

The second most common symptoms are a regurgitation of food and liquids. As the food is not able to move down in the stomach, accumulated food in the esophagus may come back through the nose or the mouth, especially during the night.

The third symptom is a pain in the central part of the chest, especially after eating food. Occasionally, this pain can be very severe and may be confused with the pain of a heart attack.

The fourth symptom of Achalasia Cardia can be chest pain, because of difficulty swallowing, the patient may not be able to consume adequate food, which may lead to weight loss.

Many patients with Achalasia Cardia have fear of cancer, however, very few patients will develop esophagus cancer in their lifetime.

Whom Should I Consult in the Case of Achalasia Cardia?

If somebody has difficulty swallowing food, they should consult a gastroenterologist. The following tests should be performed.

During endoscopy, a small tube is passed through the mouth in the food pipe or stomach. Many patients are afraid of endoscopy because of unpleasant sensations. Now a days, endoscopy is performed under sedation and is a painless experience.

What are the Findings During Endoscopy:

Difficulty in swallowing can be due to multiple reasons. During endoscopy, other causes such as a tumor, ring, and allergy are ruled out. In patients with achalasia cardia, fluid or food is seen in the food pipe. When the scope passes in the stomach, resistance is felt. However, no tumor or ring is seen.

During this study, the patient swallows a small amount of fluid, and an X-ray is taken. In the X-ray, the delayed passage of liquid is seen through the LES.

Achalasia cardia can be easily treated by endoscopic technique.

Per oral endoscopy myotomy (POEM) is an effective novel treatment for achalasia cardia. During POEM, which is an endoscopic technique, a tight muscle at the GE junction is cut very carefully. POEM is a painless procedure, performed under deep sedation, and the patient is usually admitted for 48 hours. Our team has experience with more than 600 POEM procedures. 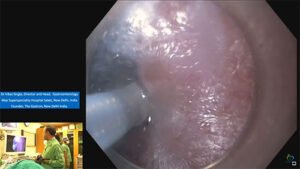 Pneumatic dilatation is an endoscopic procedure. A balloon is placed across the GE junction and in inflated, which leads to a stretch or rupture of muscle at the GE junction.

In this technique, botulinum is injected into the lower esophageal sphincter. The efficacy of the injection lasts for 3 months.

Medicines have very limited efficacy for the treatment of achalasia cardia.

Chronic pancreatitis : What should a patient and family know

Fields with * are required